Here's another entry of mine for the AHPC #11. 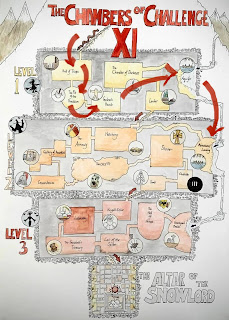 The dark steaming jungle lies directly to port, the sunlight dances off the clear, shimmering, and bright aqua surf. The young LT wonders if this beach landing be contested or will it be a cake walk as his commander boasted? As the oarsmen struggle against the heat and humidity the French Naval Landing artillerists are cursing their wool uniforms. They soon, like the Legionnaires already inland, will discard the unwanted and inappropriate items and exchange them for locally made lighter fabrics. The excessive humidity deteriorates the European theatre gear rather quickly. 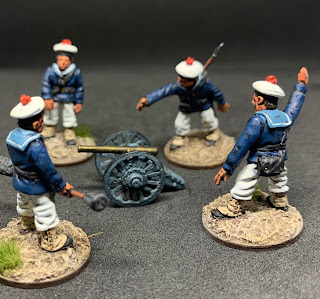 For this beach landing challenge I have chosen a French Naval Landing gun crew from Askari Minis. They are in the 1890's -1910's Naval Uniforms and are kitted out for a landing party in support of French Marines, Sailors, and Legionnaires fighting the infamous Black Flag Pirates of Tonkin. (I have Black Flag gunners on the painting table now!) 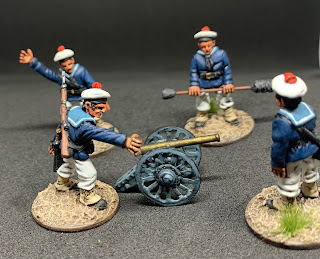 The small artillery piece is a French Mountain Gun, also from Askari Minis. However, this model is about 20 years old, Al has since made an even better retooled version of this gun that I will surely have to get. Askari Minis new retooled gun link. 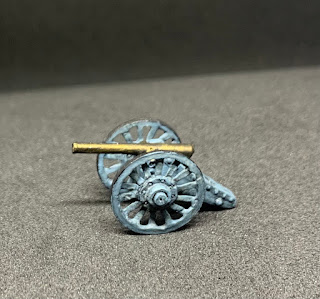 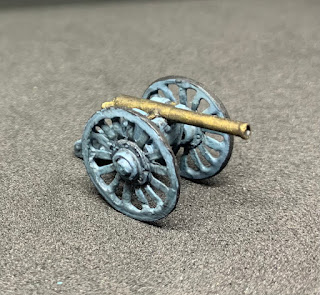 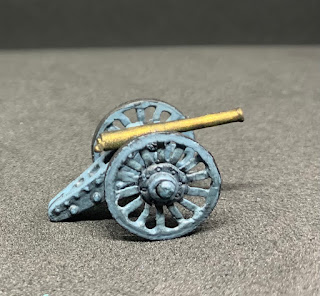 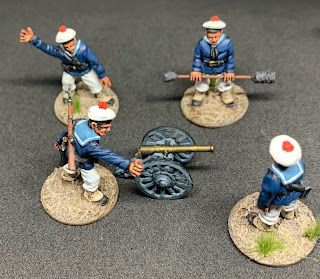 I've painted this crew for my buddy Dan from the Last Stand Boatyard to be used for my favorite rules set The Sword And The Flame, though he's also a fan of the rules set, The Men Who Would Be Kings. 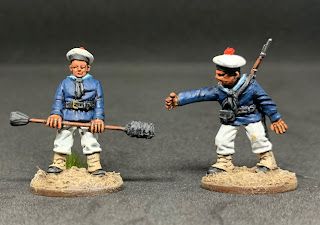 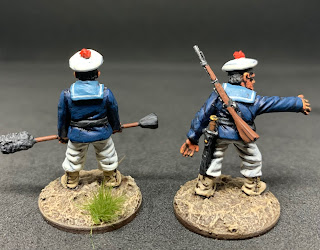 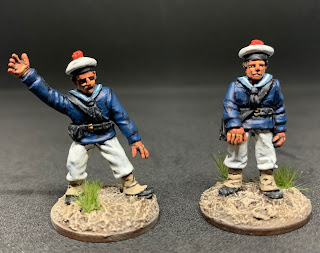 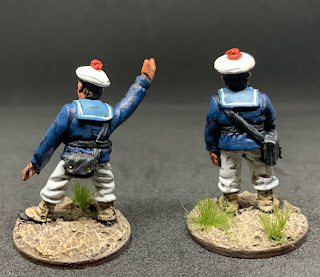 The Last Pack Train Out of Ahoogastan, NWF, 12 September 1879 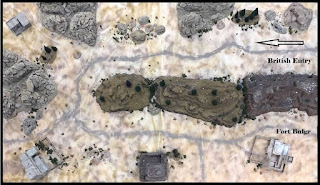 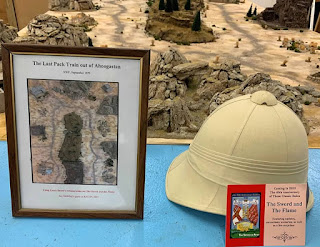 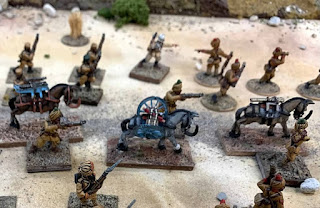 Colonel Glenfiddich halts the column, as the dust settles he peers through his binoculars at the road ahead, he thinks what a perfect place for an ambush. Through the whiny of mules and the snorts of angry camels he issues the order to send out scouts to recon the treacherous path ahead…

The British (mainly Indian army units) are moving a supply train, out of Ahoogastan, headed for the Bulgur Pass, thence to Jellybad. These vital supplies must get through to the fort protecting the Bulgur Pass.

The Pathans of Ahoogastan regard the British Mules as the finest of animals and feel that Allah created them just for use in the rugged terrain of Ahoogastan. They aim to steal every mule. The main object of this game is to have possession of the mules at the game's end. 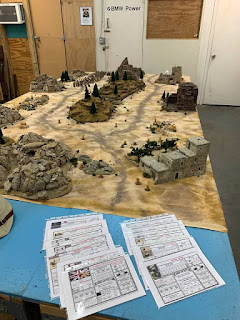 My interpretation of the scenario, the Game table at our clubhouse in Fort Lauderdale Florida, Das Krieg Haus hosted by the South Florida Miniatures Gamers, SMG (2/27/21).

This is a scenario I’ve wanted to run for a very long time, I’d just not had enough pack mules or Pathans. Borrowing troops and buildings from my late friend’s collection, Bill Pritchard, I was armed and ready to run. My friend Jay Stribling form the long time Jackson Gamers wargames club ran this scenario for us in South Florida at one of our HMGS-South cons back in 2005. The game was a big hit and tremendous fun! However, things in Florida did not go anywhere near as Jay had planned for nor the way this game had went for him back in Jackson Mississippi.

Here’s the link from Jay's original scenario and AAR

The main premise of this game is to have more pack mules at the end than everyone else. The Pathans are every tribe for themselves while the Anglo-Indian force works together. The Pathans may not fire on each other outright but may melee with each other to capture the mules.

Here are the scenario briefings for each side. I've altered them very slightly from Jay's original scenario profiles and put them in the same format as the 20th Anniversary The Sword And The Flame scenario book. I put all my TSATF scenarios into this format. I've also altered the map to suit my terrain and vision of the game. This scenario can play out very differently based on the personality's of the players involved. 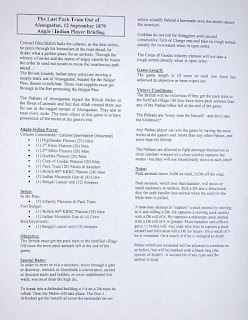 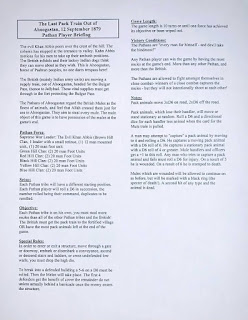 As the GM I picked (6) hidden locations on the map as the starting locations for each Pathan command. I allowed hidden Pathan movement and hidden set up. The Anglo-Indian troops enter on one side of the valley and must get the pack train to the fort around the bend to win. The Pathans must capture the mules in the pack train for their victory conditions. The Anglo-Indian force must work together, however each Pathan tribe is on their own, are out for themselves, and must capture more mules than  their brethren to win, to the victor, the spoils.
Posted by Sgt. Guinness at 9:50 PM 9 comments: