This post is a size comparison of these 3 figures with several other colonial type figures by several different manufacturers. 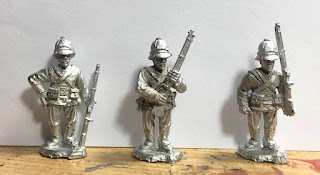 I'm currently painting up some of these lovely figures for a web friend of mine. We are both interested in the Tonkin campaign and enjoy collecting miniature figures. I traded him some lead for my painting services. I plan on painting them with navy jerseys, white pants, white pith helmet, and black webbing for service in the start of the Tonkin campaign 1885. 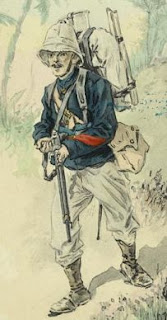 As soon as I opened up the box of figures I immediately noticed how large these figures are. They are seriously large but are not too large to be used together with other figs on a gaming table once painted and based. That being said I will only use them in units by themselves with other Gringo 40’s as some of the other ranges are just too small to mix well. However I’m confident these awesomely detailed figs can be used with most of the currently available 28mm figs on the same table but in separate units as stated, so I decided to undertake a size comparison with several of the other manufacturer's figs I have in my eternal lead pile waiting to be painted.

Whether you agree with my assessment or not, the Gringo 40’s Tonkin range is so extensive that even if you don’t think that these figs can be used alongside other 28mm figs it won’t matter because this range alone has all the figures one would need to game this campaign on both sides.

Before I post the comparison pics I want to say that the detail on these figs is crisp and clean with MINOR flash and minimal mold lines making the prep and clean up a breeze. This being my first hands on introduction to Gringo 40’s figs, save for the amazing Raisuli figure my buddy the Mad Guru of the Maiwand Day http://maiwandday.blogspot.com/ blog fame gave me, I was pleasantly surprised by the quality. In addition the uniform and equipment detail  of these figures are spot on historically correct. For example, these FFL figs are wearing naval troop jerseys as the original classic FFL uniforms we all know and love which are made of wool rapidly deteriorated in the extreme humidity of SE Asia. Thus they had to borrow bits of uniforms and kit from the naval troops already in theatre. They figs are also kitted out in the locally manufactured oversized pith helmets. 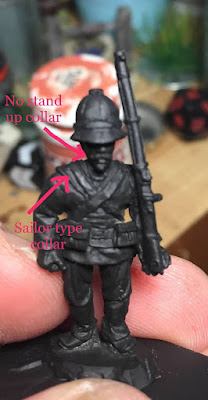 In the pics you will notice that the casted fig bases are taller / thicker than the other manufacturers figs. Grinding these down quite a bit will make them fit in even better with other mfgrs. Placing them on thinner bases would help as well. They are also thicker and bulker than the other mfgrs but once again, when painted, based, and in action on the table the difference is negligible in my humble opinion.

These figures also have great possibilities for other theatres and campaigns. I definitely intend on getting the full range of these great figs!

The following pics show the Legion figs I’m working on next to many different manufacturers. All figure manufacturer's names are from left to right. 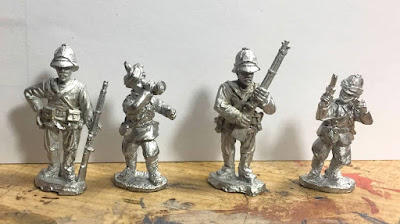 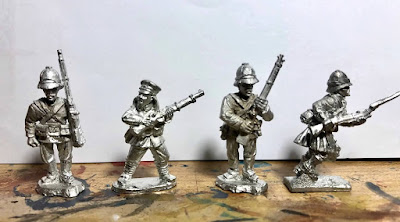 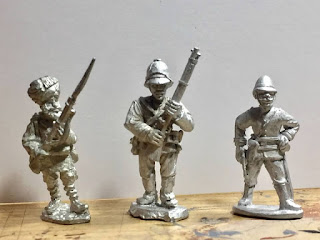 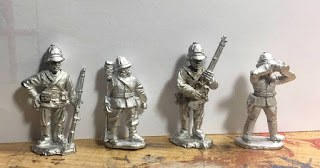 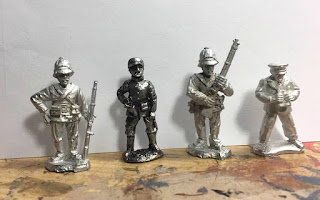 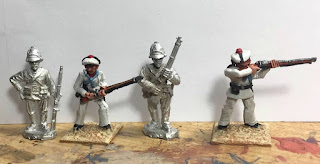 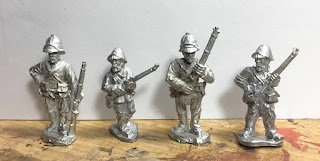 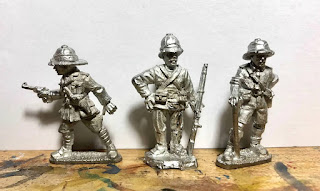