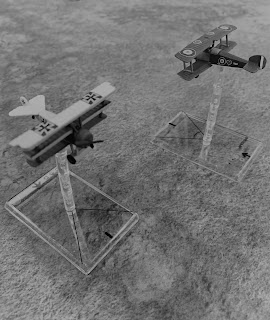 The South Florida Miniatures Gamers had a fun game of Wings of War WWI on (2/29/20) at our Fort Lauderdale clubhouse, Das Krieg Haus.

This is a fast and simple card driven game system that is huge fun to play and very easy to set up. We played an "Escort Mission" with the British attempting to recon an area of the German forward outposts. The German mission, was of course to shoot down the recon plane so as to protect their forward assets.

The game was a hoot and I really love this system, I should definitely play it more often. I'm sure my kids would enjoy it as well as it's not one of those "ALL DAY GAMES" that they loose interest in after a few hours.

The British aviators won the day, they successfully reconnoitered our front lines and safely returned to base to provide the data to their forward HQ.

We had a small, but fun turnout. My regularly scheduled game was postponed due to my son's soccer team making it the championship game so I most definitely needed to be there, and in addition I'm one of the assistant coaches as well! Steve K was kind enough to drive up from Miami and host this game for us. Not only that but he brought amazing Jamaican style patties with him and treated us all. Thank you Steve!

Post scrip: Since this game the world has been turned upside down with the global COVID-19 Pandemic. That being said we've temporarily suspended all monthly club games for the near future. We hope to be back together as soon as things get better and we are allowed to congregate again.

Everyone be well and stay Healthy!!!! Cheers, Sgt G. 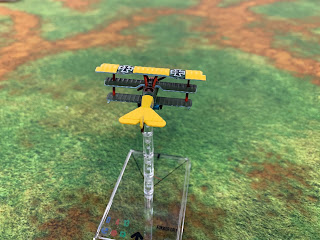 Here is Sgt G's tri wing plane that went down in flames ignominiously. 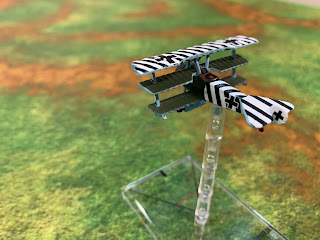 Here's Steve K's plane, he flew much better and survived the day. 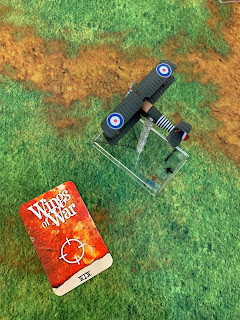 Here is the card deck that runs the games, each person pulls (3) cards for each turn. Each card has a maneuver that ties into the last one. The cards are specific for each type of plane and have different turn radius', different maneuvers, and such. 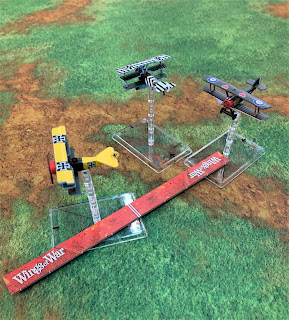 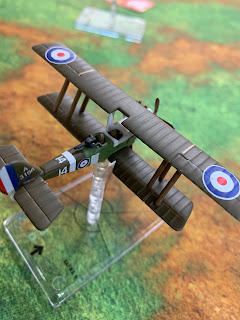 Each plane comes with its own movement deck and flight stand, however a core game box needs to be purchased for the rules and range stick. 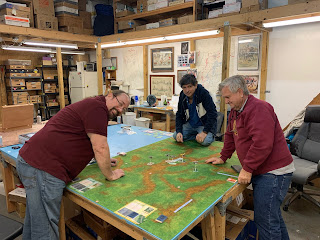 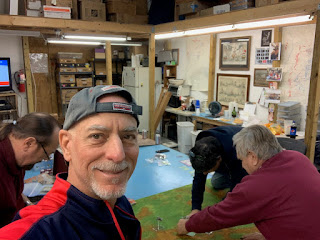 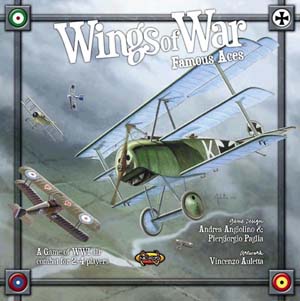 The first two sets are Wings of War - Famous Aces (Nexus Editrice 2004) and Wings of War - Watch your back! (Nexus Editrice 2005). The first one includes a selection of fighters with personal colors of the most renowned aces of World War I: the planes are Fokker Dr.I and Albatros D.Va for Central Empires and SPAD XIII, Sopwith Camel and Sopwith Triplane for the Allied. WoW - Watch your back! adds other fighters and some two-seaters allowing bombings, recon missions and other special scenarios. WoW- Burning Drachens (Nexus Editrice 2005) is the newest set in the World War I series. It includes drachens, AA guns, machine guns, air-to-air Le Prieur rockets, trench systems, and optional altitude rules. WoW- Burning Drachens includes rules for solo play as well as multi-player dogfights, bombing runs, and strafing or recon missions. Each set allows 2/4 people to play; the number can increase using more than one set.