The Wind And The Lion - Colonial Barracks game pics


"The Wind And The Lion"

These photos are from a game we ran at the inaugural Colonial Barracks Convention in New Orleans several years ago (www.sergeants3.com). My friend Nick Zizo and I had been planning to run this game for a very long time. Nick and I had first discussed doing the game at Historicon some 10 or more years ago. It actually came about while smoking cigars and drinking whisky after a long day of gaming in Cocoa Beach Fl where RECON used to be held. We decided who would build what and paint which forces. Nick painted the Marines, the Bashaw's guard, the French cavalry and numerous Berber units. He also supplied Mrs. Pedecaris.
I provided the German infantry, guns, limbers, and Major Faust, the Raisuli, more Berber units, and I scratch built the custom items that make this iconic battle so easily recognizable. We have used a Foundry sword wielding Baluchi fig for the Raislui for all of our games to date, I hope that in our upcoming game Nick has painted the wonderful Raisuli fig from Gringos 40's!

The remainder our our buildings come from every source possible. Many are from the great MBA (Miniature Building Authority) 25/28mm desert range. Others come from various internet sources, but the bulk came from a guy on ebay who does wonderful foam card adobe type bldgs. If you look closely at the bldgs in this post and the one to come for the Colonial Barracks game pics you will see slightly different village set ups with bldgs relocated or added because when we ran the game we could not find the game map and used what bldgs we had on hand and what we could draw from our failing memories!

The rules we used for all of these games, as well as for all of our various colonial and post colonial actions are the timeless "THE SWORD AND THE FLAME" by Larry Brom. We find this set to be huge fun and perfectly compatible with both convention play for 6-10 players as well as club play with 2-4 players. We have been using this set and its variations since the mid 1980's. The current set is the 20th Anniversary Edition available from (http://sergeants3.com). We have made a few adaptions and changes for larger battles and to speed up play, but have kept the iconic melee stage intact as it adds great tension and Victoria Cross type results. 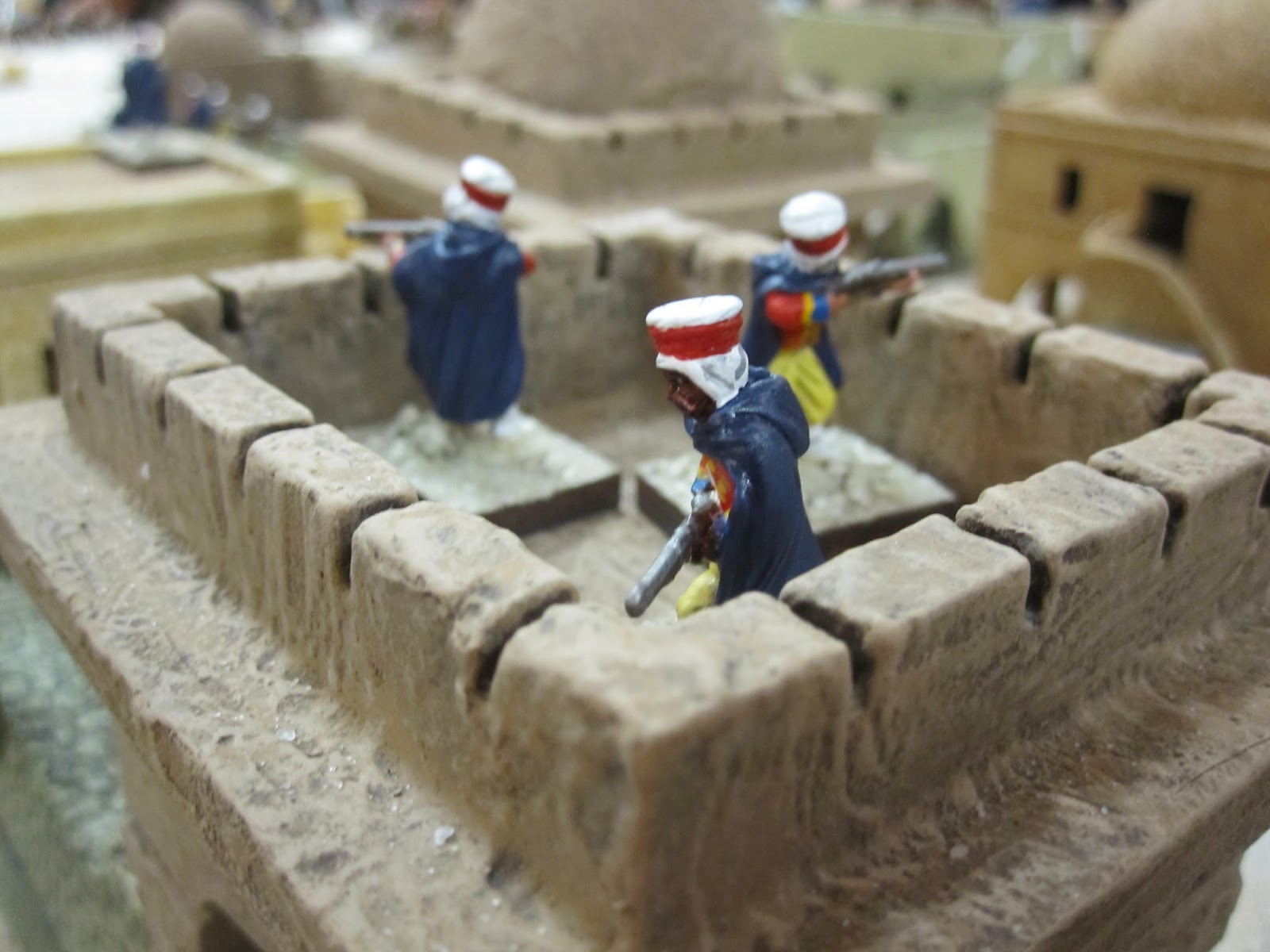 The Bashaw's troops stand guard in one of the village towers. These are dismounted Saphi figs from Askari Miniatures (http://www.askari-minis.com). 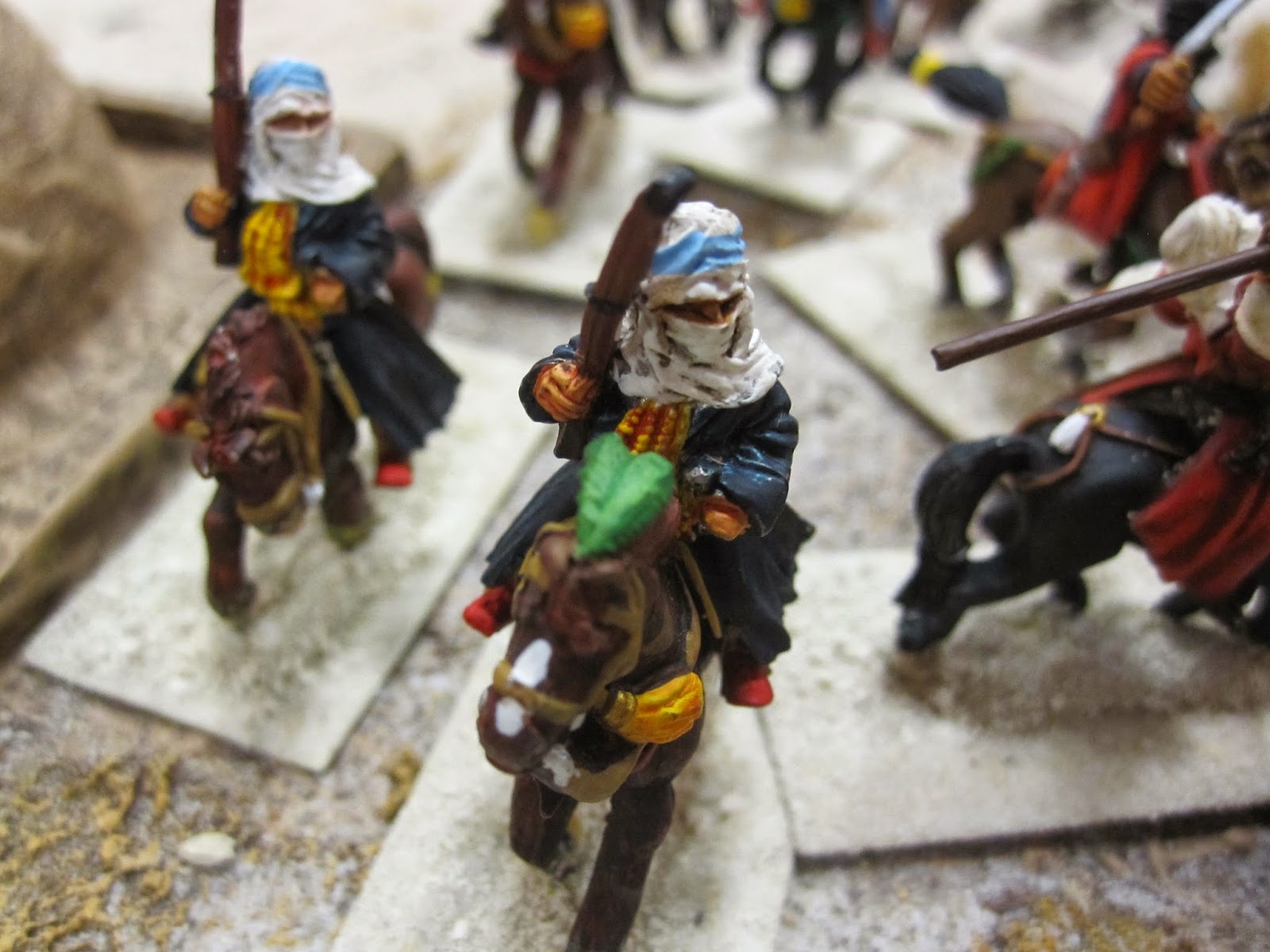 The Riffian Berbers advance into the village to rescue the Raisuli, defender of the faithful, lord of the Riffian Berbers. These are from Old Glory's French Foreign Legion line. (http://www.oldgloryminiatures.com) 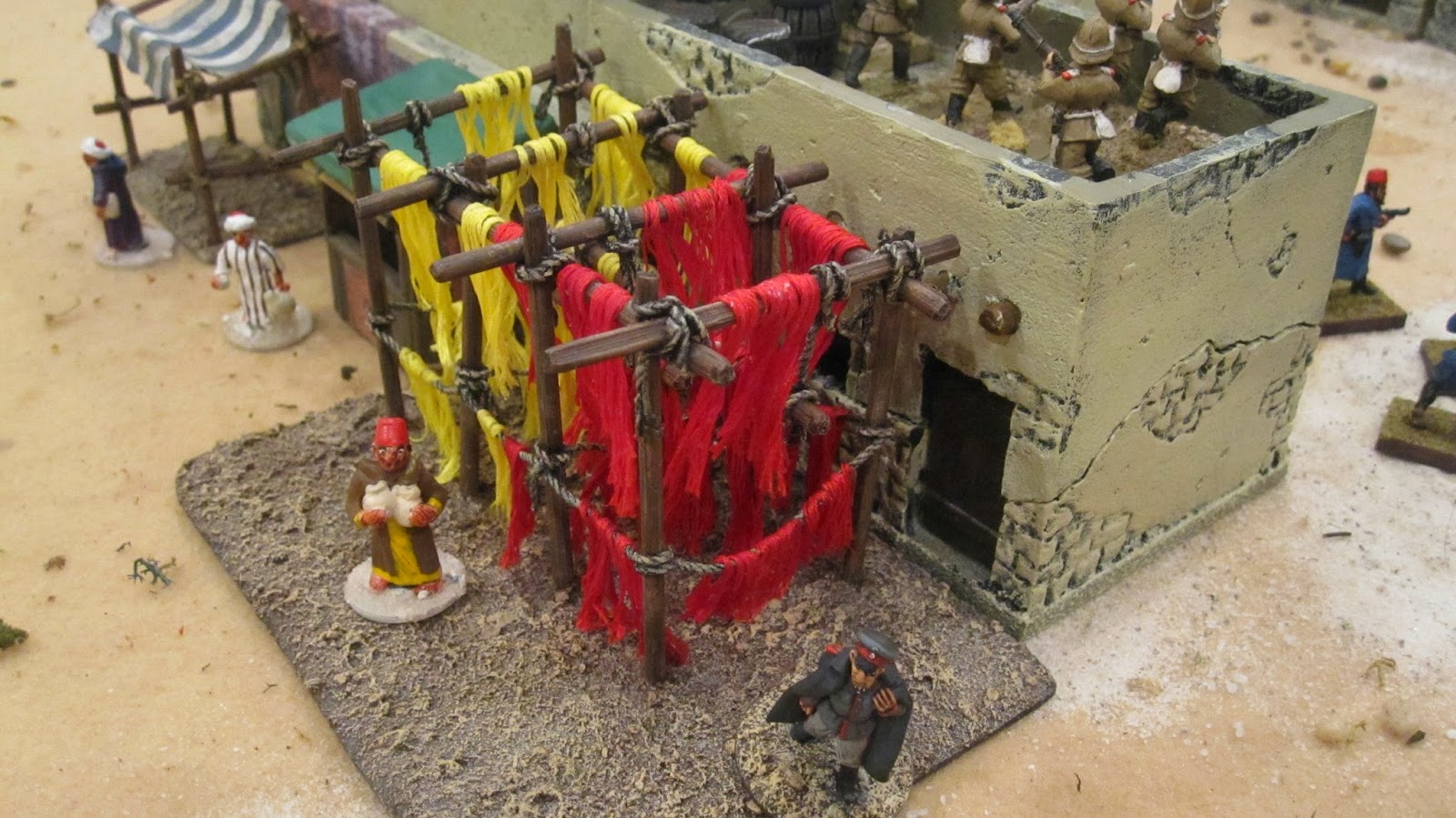 Major Faust stands next to the wool dying merchant, his horse being tethered elsewhere. I made this piece using grocery store bamboo skewers, miniature ship building rope, and craft yarn from Michael's.
Major Faust is from Brigade Games WWI Gallipoli / Palestine range German Asia Korps.(http://brigadegames.3dcartstores.com/German-Asia-Korps-Command-4_p_656.html)
I also used one of these figs for a gun crew commander. 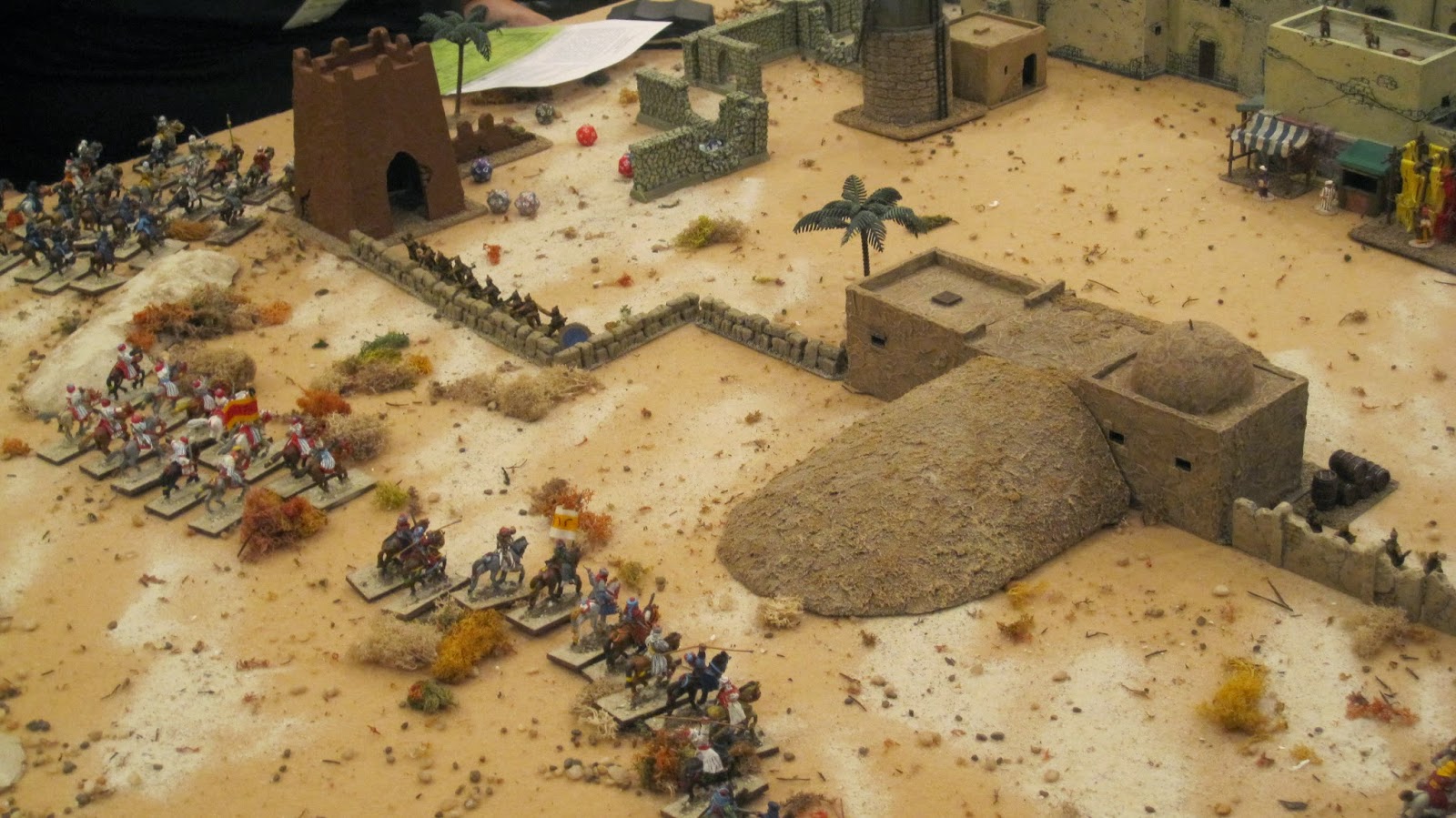 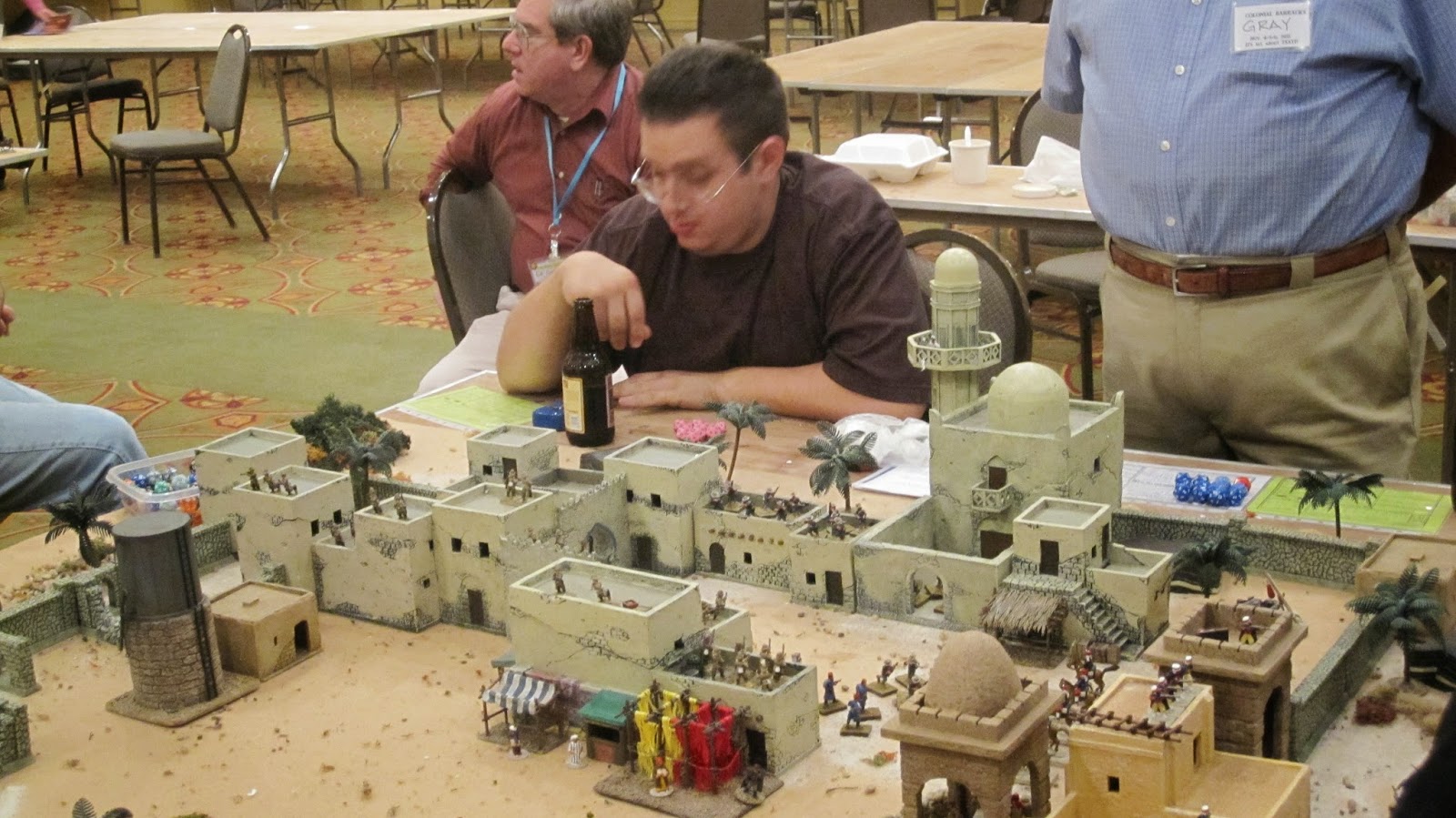 The Marine commander ponders his fate over a nice dark adult beverage! (my friend Jimmy Zizo) 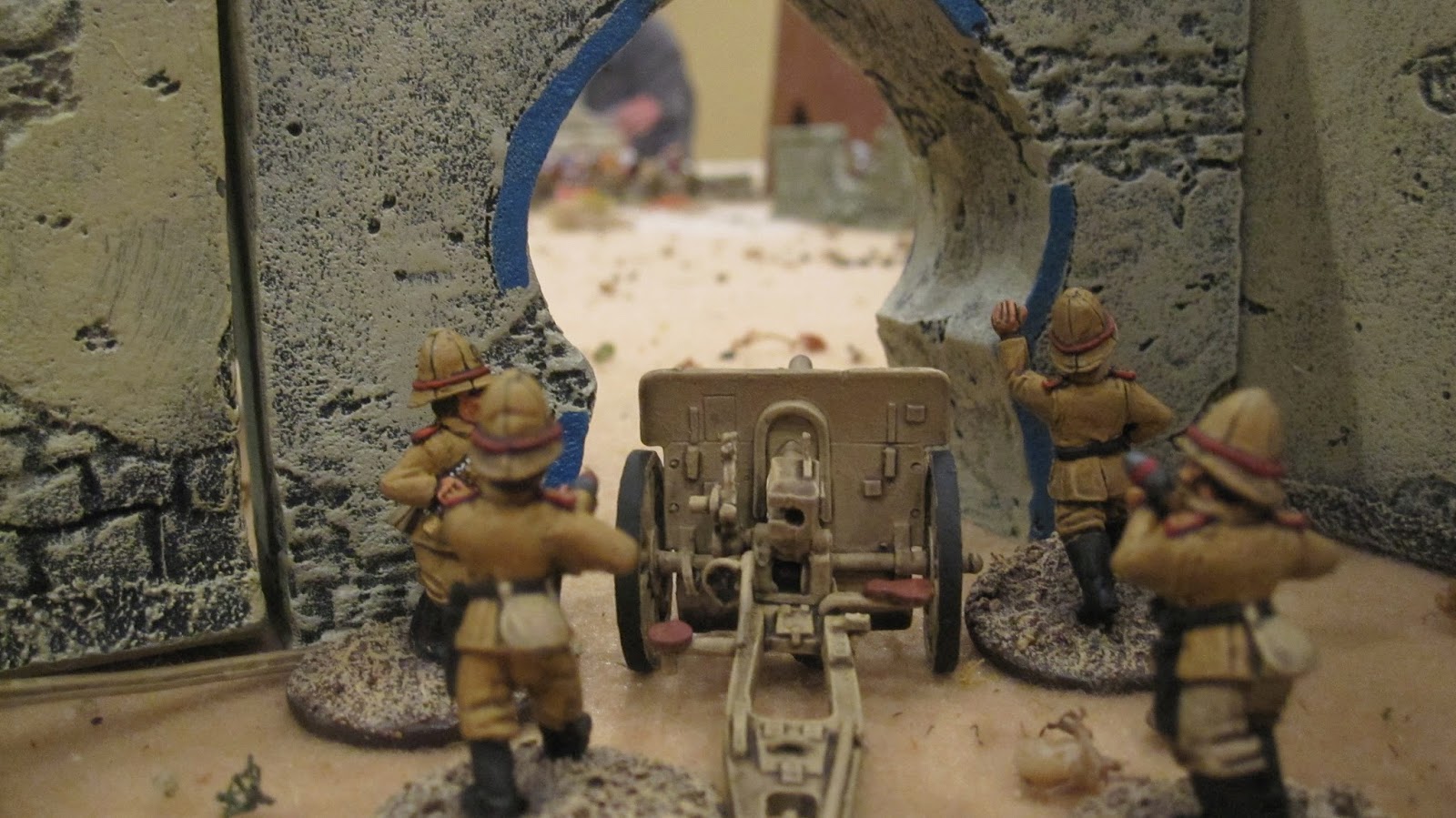 The German gunners take aim at the advancing Berbers. There were two such guns in the game, batteries #13 & #17, each with an ammo limber. One FK16 field gun came from Brigade Games  German WWI range with an Askari Miniatures limber and the other FK16 gun and limber came from Tiger Miniatures, available from Recreational Conflict in the USA, and the other from (http://www.recreationalconflict.com). 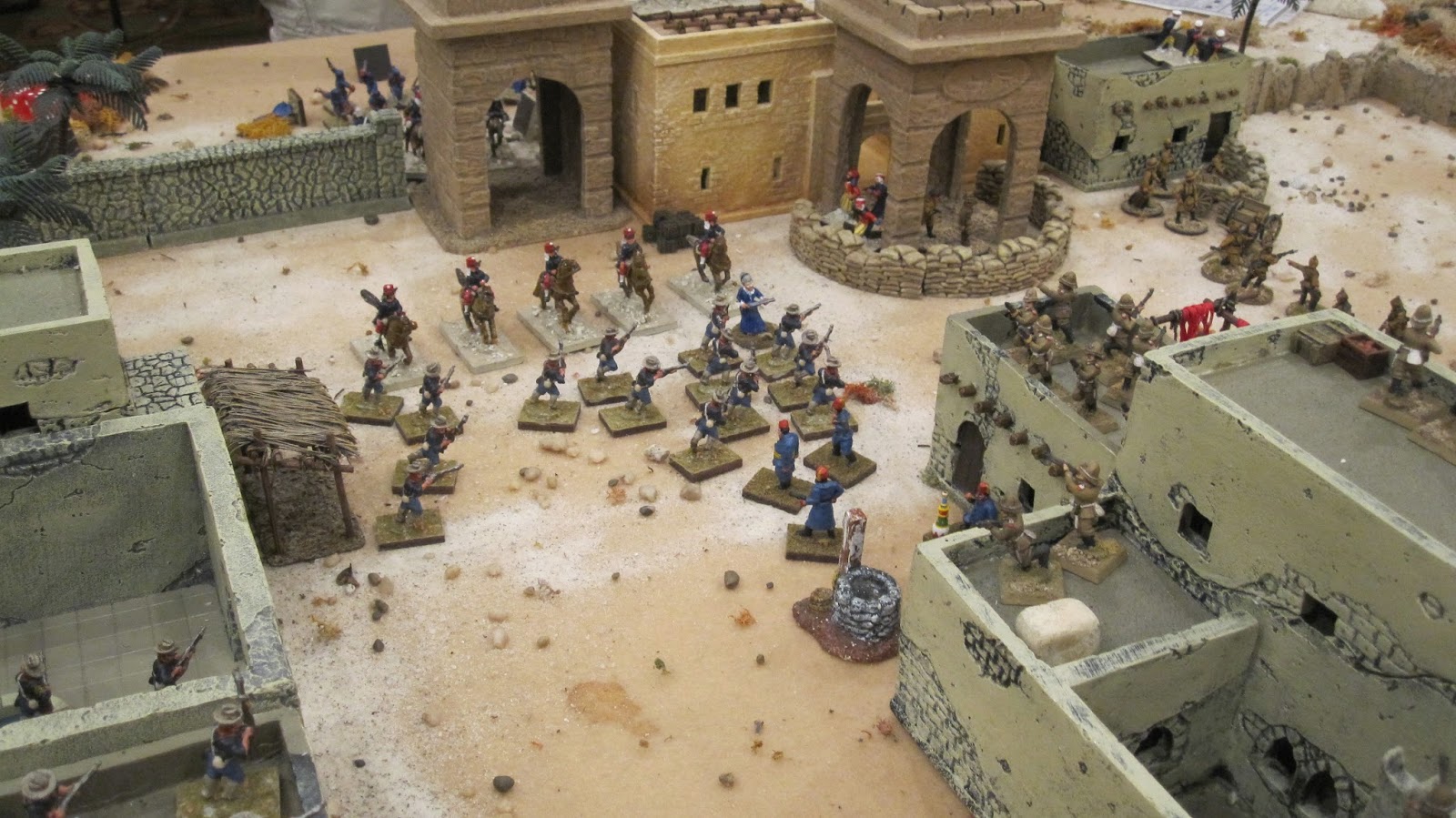 The Marines make their move on the Gendarmes Police station and jail house. French cavalry have charged them in the flank. The Marines are from the Old Glory Boxer Rebellion line and the Chasseurs d'Afrique are from the OG French Foreign Legion range. 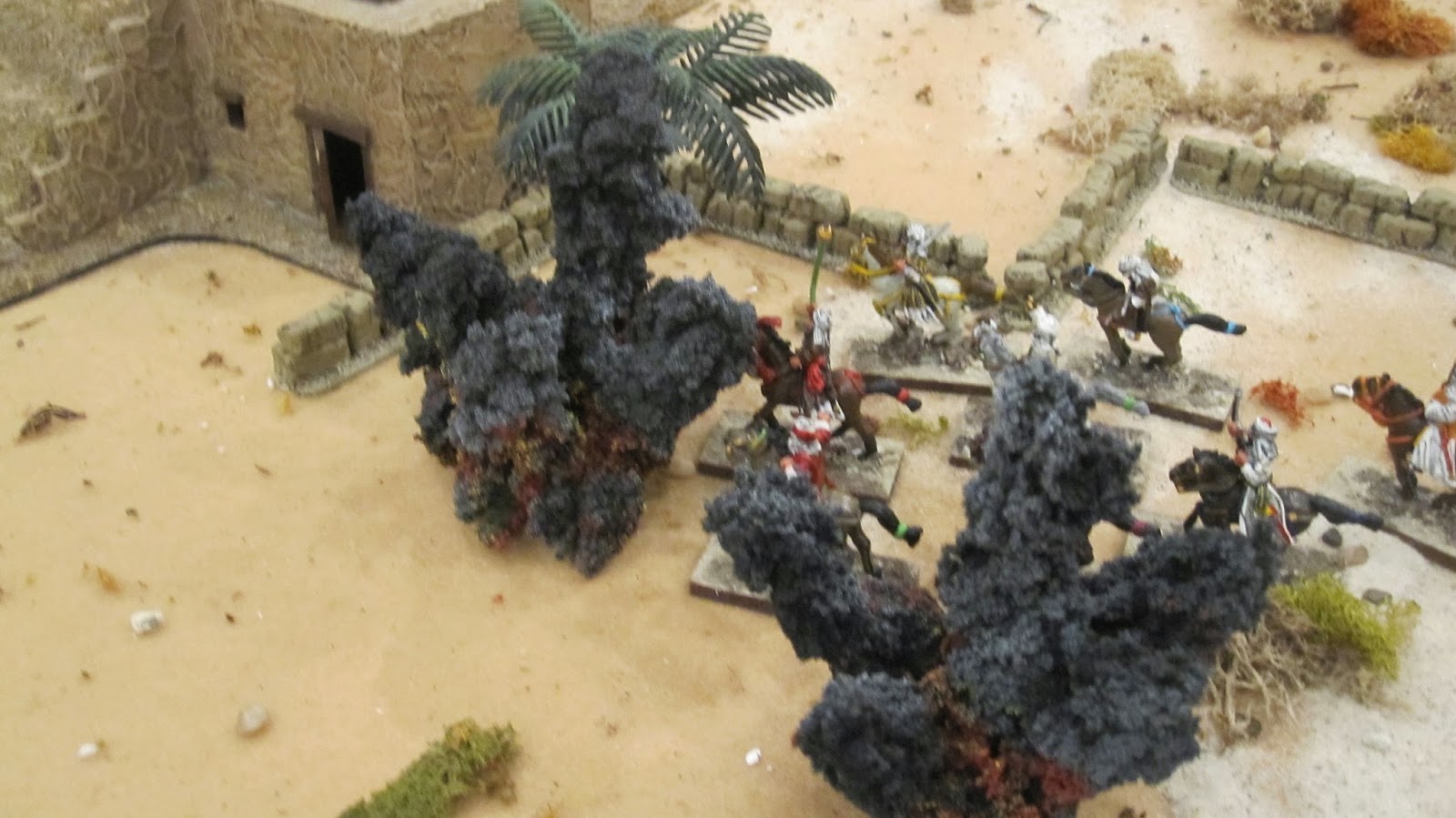 The German gunners have found their mark and ranged in on the advancing horde! Excellent explosions and low stone walls are made by Dwight Jones who sells great custom made terrain at the HMGS South and Rapier conventions in Florida, and at Colonial Barracks in NO.

Rapier in Jacksonville Fl.: http://www.rapiercon.com
HMGS South in Orlando, twice a year: http://hmgs-south.com
Colonial Barracks, a Sergeant 3 and The Sword And The Flame sponsored con in NO: http://www.sergeants3.com/colonialbarrack_21.html 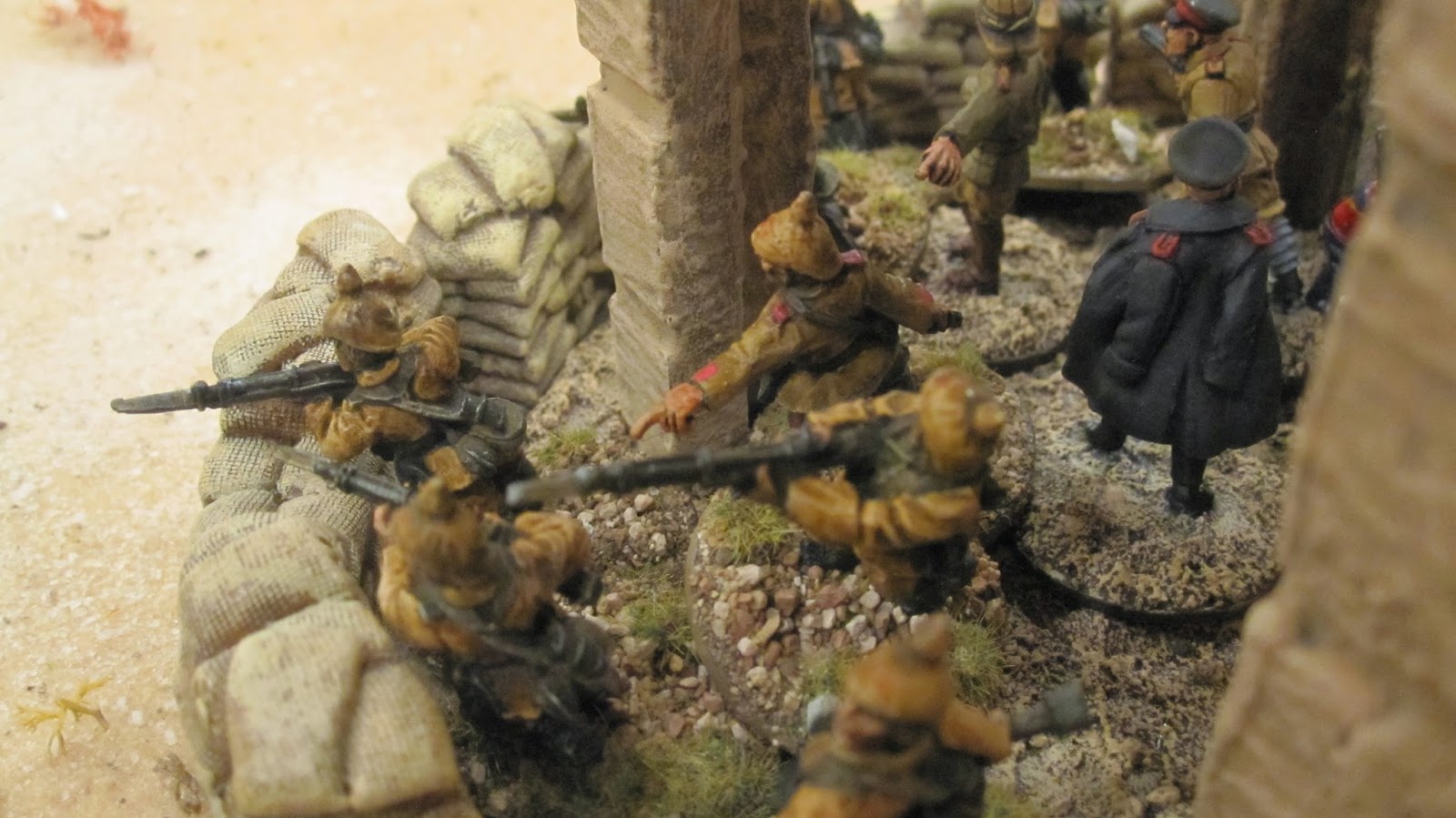 German infantry man the sand bag emplacement around the Gendarmes post, where Major Faust has temporarily taken refuge. These great 25/28mm pre-painted sand bags were bought from Rudy Nelson at Time Portal Hobbies from an HMGS-South con. They are made by Pegasus Games. The German infantry come from Old Glory in their WWI range and are labeled German Reservists.

I will unearth more game pics and possibly some WIP terrain pics for the custom terrain I've made for these games.

Email ThisBlogThis!Share to TwitterShare to FacebookShare to Pinterest
Labels: AAR, Colonial Barracks, The Wind And The Lion, TSATF Scenario

Hello all. Nick Zizo and I have decided to run our very popular "The Wind And The Lion" game again due to popular demand and constant requests. The battle we will be playing is the final engagement of the movie where the US Marines attempt to return Mrs. Pedecaris to America and the Riffian Berbers attempt to free the Raisuli while the Bashaw's forces and their German and French allies try to prevent his liberation and end up fighting off both the Riffian Berbers as well as the USMC at the same time!

Since we are HUGE fans of the rules set, The Sword And The Flame, and we've been playing the original set since the early 1980's, we will be using TSATF 20th anniversary edition in 25/28mm scale.

The game will have several pieces of custom terrain made to copy the iconic setting of the movie, along with the arch set from MBA which was made especially for this purpose, by the way.
(http://www.miniaturebuildingauthority.com)

All the forces and characters involved in the movie battle will be included in the game, some having special rules.

We have run this game at a few of the HMGS-South's cons and at Colonial Barracks in NO,  link attached: (http://www.sergeants3.com/colonialbarrack_21.html). Colonial Barracks is a fantastic con any colonial gamer, a fan of TSATF rules sets, or of Larry Brom’s other rules just can’t afford to miss.

We may have even run it once in the colonial rooms at Historicon in the past.
www.hmgs.org.

We hope to see some of you there!