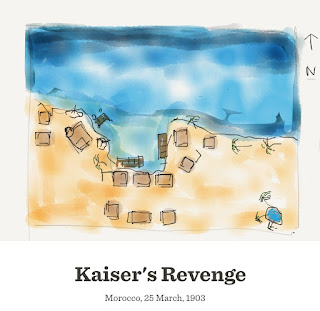 This is a follow up game based on the results of last game played in this scenario series.....


Kaiser's Revenge
The recovery of Kaiser William II's favorite nephew by the Bashaw's Black Guard has given the German government a black eye. Calls for revenge and invasion by Hun politicians has been quelled by the formation of an expedition to recover the envoy manned by Aryan troops alone. The failure of the last mission was attributed to the inclusion of subpar French troops.
Having captured the German envoy the Bashaw's Black Guard is taking him back to Tangiers. Intel from a sympathetic member of the Bashaw's court revealed their line of march to a German agent. The German expedition is intent on attacking the column at or near the the port vill of El Safir before it reaches Tangiers.

As the Aryan strike force approaches the port town in the German gunboat Angriff another vessel is spotted on the horizon steaming towards the city. It appears to be flying a French flag.....

The uneasy alliance of the German and French forces to rescue the German envoy Graf Manfred von Kreigsieber from the clutches of the Emir Ali-ben-Fulin Arown has collapsed with the Bashawa's success in capturing him from the pirates of Mogadir and his subsequent forced pilgrimage on the way to Tangiers (the results of the last game).

What will happen next? That is up to you! 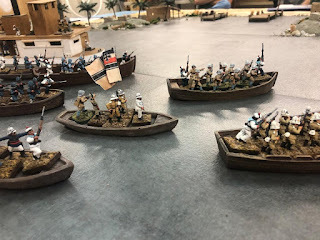 
This game will be run at Hurricon next month, an HMGS-South convention in Kissimmee / Orlando Florida, 29 September, 2018. There are still a couple of slots available for this game. If you miss out on this one there are at least 10 other great The Sword And The Flame rules based games as well as dozens of other outstanding games to join in on. We will use The Sword And The Flame standard 20th Anniversary Edition rules for the land actions and our preferred set of naval rules, Gunboat & Dhow that fit seamlessly with TSATF and are an exquisite compliment to an already outstanding rules set. G&D where designed and published by the indefatigable Last Stand Dan's Boatyard. 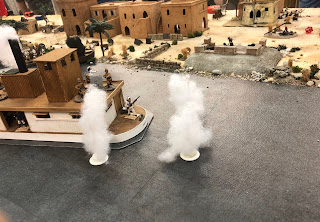 French civilian steamer with low draft pressed into armed service to compensate for the shallow water is coming under fire from approaching pirate vessels. 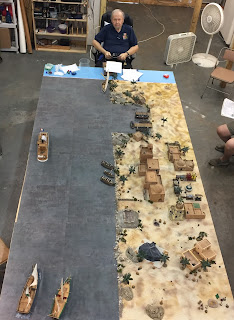 Mogadir,
the modern Barbary Corsairs lair of Ali-ben-Fulin Arown, the site of the last battle.

Once the game is played I will post the scenario specifics. I'm reluctant to do so prior to the convention as I do not want to give too much away before the game is afoot. 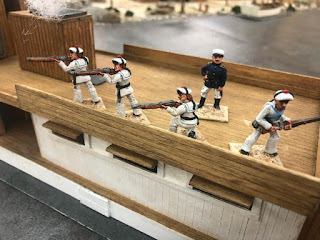 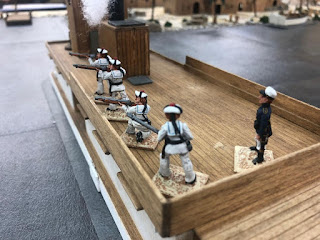 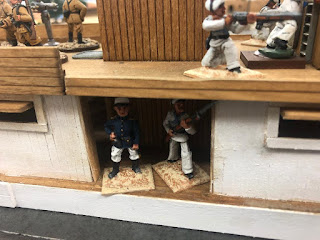 The Sword And The Flame Link:
http://www.sergeants3.com/

Email ThisBlogThis!Share to TwitterShare to FacebookShare to Pinterest
Labels: Colonial, Gunboat, Hurricon, Last Stand Dan, The Hun The Frog & The Lion, The Sword And The Flame, TSATF, TSATF Scenario

One of our own SMG members, my friend Devon Start has won 3rd Place in the Historicon 2018 Painting Competition for the category of Historical Group or War Machine. Congrats Devon, well done!!!!!!

Here's a link to close up pics on his site:

and then his blog is below.
http://maddrdevo.blogspot.com/2018/07/third-place-at-historicon.html