A Fictional Scenario For The Sword And The Flame.


Bearing Only The Slightest Resemblance To A Certain Well Known Film. By Patrick R. Wilson & Richard Houston, and recently adapted by the nefarious Sgt. Guinness to suite his own misguided imagination. In addition Patrick Wilson of TVAG has been working with me to update the game maps as well as undertaking additional support and assistance with this project that he had originally completed many years ago.......
Check out Patrick's website of great hobby wares. http://www.thevirtualarmchairgeneral.com/

Out of indigo shadows on the Mediterranean, a small force of elite Marines in long boats silently rows into the port of Mogadir, pirate capitol of the Moroccan coast.  A sun baked hell hole by day, Mogadir is the lair of the infamous brigand Emir Ali-ben-Fulin-Arown who fancies himself the next Bashaw of Morocco.  Besides banditry inland and all along the coast, he has lately begun stopping foreign shipping and helping himself to such cargoes as serve his schemes for power.  Not incidentally, this has put the legitimate government in danger of being deposed by any of several European powers looking for an excuse to intervene and "civilize" the last independent Muslim state west of Constantinople.
The pot boiled over five days ago when the newly appointed German envoy, Graf Manfred von Kriegslieber, Kaiser Wilhelm’s favorite delivery boy, was kidnapped off the packet boat from Marseilles en route to Tangier.  Seizing the opportunity to be a player in North Africa, Berlin made the impossible demand that the Moroccan Government find and free the envoy in just three days or stand aside while the Kriegsmarine resolved the problem.  The Bashaw in Tangier promised to send a rapid desert strike force towards Mogadir but with a strong statement that Morocco would defend its sovereignty if need be. Berlin was not impressed--and neither was Paris.

Telegram to the German Foreign Ministry:
"The Bashaw expresses his deepest regrets over this incident and solemnly promises to rescue the Kaiser’s envoy.  However, the Bashaw, The Great and Powerful Defender Of The Faithful, also pointedly reminds His Majesty’s Government that any foreign intervention in Morocco's internal affairs or violation of her sovereignty will be met with the wrath of Allah".

French Prime Minister, to a Le Figaro reporter, March 19, 1903.
"It is the sacred duty of France to bring these misguided children of the desert the blessings of French Culture, Shrapnel, & Quick Firing Cannon.

Madame La Republique, already deeply invested in North Africa, was not willing to share their Empire of sand and scorpions with anyone, least of all the Germans, and France has long had eyes on Morocco itself.  However, as they have no legal right to forbid unilateral action, Paris has insisted on a joint operation, sweetening the deal by offering a force of marines, sailors and transport better suited to Mogadir’s shallow waters.  Berlin’s blustering aside, only a small force of the 1st Seebattaillon is in the Med on a cruiser whose deep draft makes it impossible to cooperate.  Thus an uneasy alliance has been cobbled together by telephone (French telephone at that!) and the operation has already begun. 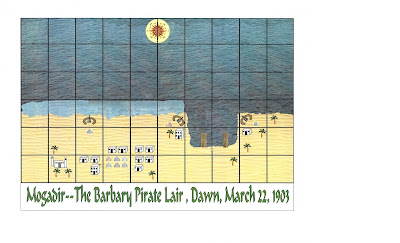 Here is the game map for this scenario, which we, SMG, The Southern Miniatures Gamers, will be running at HMGS-South's Recon-2017 convention in Orlando Fl. this coming May 2017.  Check out the link for the con and club details.    www.hmgs-south.com


Stay tuned for more updates and WIP reports on the pieces made for this scenario and prep for this massive game........
Cheers,
JB

Posted by Sgt. Guinness at 2:25 PM No comments: