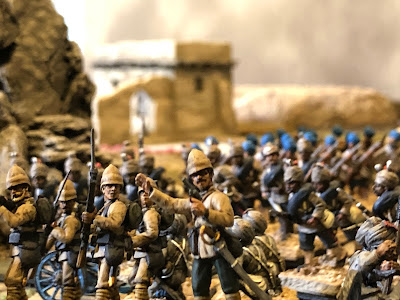 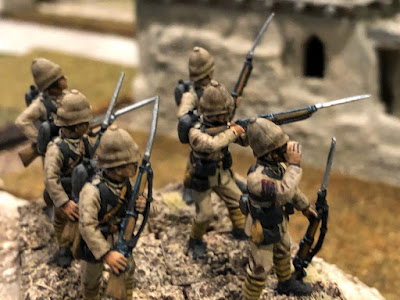 I have been working on my NWF collection for decades. I started my collection in 15mm and later changed to 28mm in the early to mid 90's. With multiple other gaming interests, two young sons, dedicated family time, playing and coaching ice hockey, I can rarely stay in one genre for long, hence the long term unfinished project. With my good friend the Mad Guru working on another epic NWF game, the Battle of Kandahar / Battle of Baba Wali 1880, I was motivated to paint up some units for use in his game. You can see pics and read about the preparations and progress on his awesome blog.  http://maiwandday.blogspot.com. He has been working on this game for about a year. I have been planning to fly across the county to join the game as one of the players and have committed to paint up and supply a couple of units. This post is about one of those units. Anyone even remotely interested in colonial gaming or the 2nd Afghan War in particular needs to check out both of Mad Guru's sites as they are a treasure trove of information, a visual treat, a source of inspiration, and one of the best blogs and websites on the web. www.maiwandday.com

For this project I decided to start with a unit of 28mm British colonial infantry, one of the plastic Perry Miniatures kits that I had gotten from a friend. These were already built and painted but needed touch ups, re-basing, and changes to make them the 2nd Battalion 60th Rifles - Kings Royal Rifle Corps 1880. 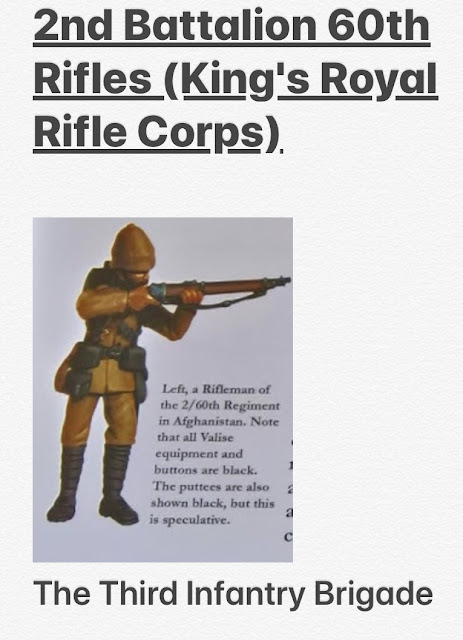 Here is the painting reference from the back of the Perry Miniatures figures box.
I painted all the waist belts, haversacks, 1871 Valise Equipment, bayonet scabbards, and rifle slings black. I painted the cap dark green as well as the puttees on one of the officers and the pants of another officer. The remainder of the work was touch ups, corrections, and basing.

Here's a bit of historical data for the 60th KRRC 2nd Battalion for this battle:

2nd Battalion 60th Rifles (King's Royal Rifle Corps)
Commanded by Lt. Colonel Joseph James Collins. The 60th Rifles joined the South Afghanistan Field Force, Reserve Division, at Multan in October 1878. November saw some companies of the regiment on escort duty to General Stewart and various Royal Artillery divisions, before they arrivied via the Bolan Pass at Quetta towards the end of December. On 8th January 1879 the 60th Rifles marched through Kandahar, which had surrendered on the previous day. They had an expedition to Kelat-i-Ghilzai before returning and camping at the old 1839 British barracks at Kandahar (where Collins joined and took command of his regiment), until the end of March 1880 when they marched with Stewart to Ghazni, taking part in the action at Ahmed Khel. After some time in the Logar valley, the regiment eventually moved to Kabul at the end of July. After the march to Kandahar in August the Rifles were engaged with the enemy during the reconnaisance of Baba-Wali, and during the following day in the Battle of Kandahar that defeated Ayub Khan. They reached Quetta again on 19th September, and then onto Sibi, where Lt. Colonel Collins died of dysentery. With Macgregor they went out against the Marri tribes and then finally returned to Mirat on 24th November 1880. 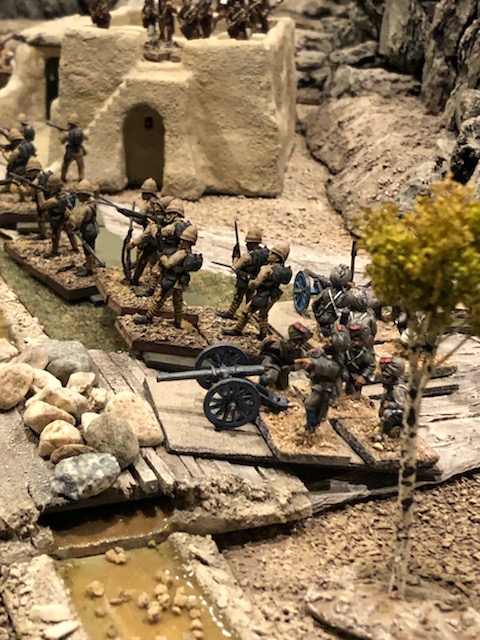 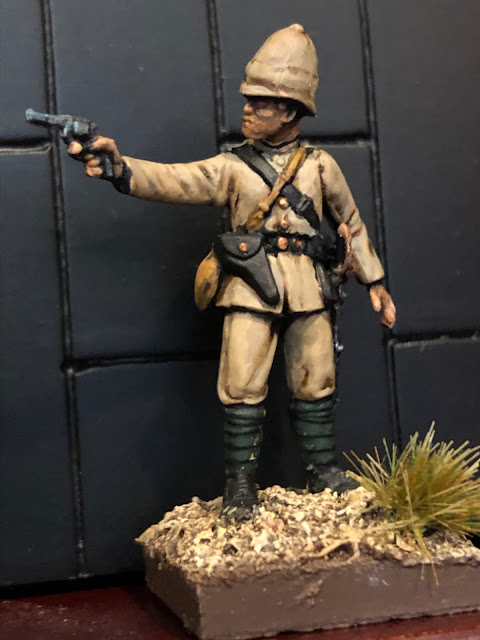 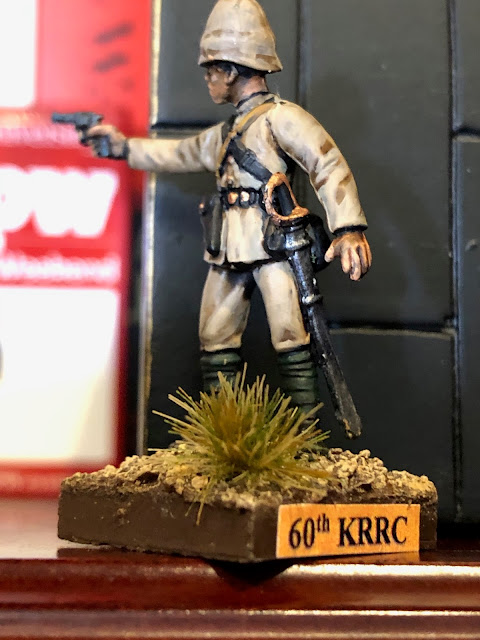 Here's some of the research I used: 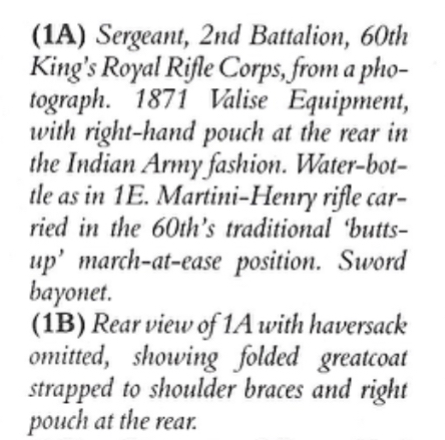 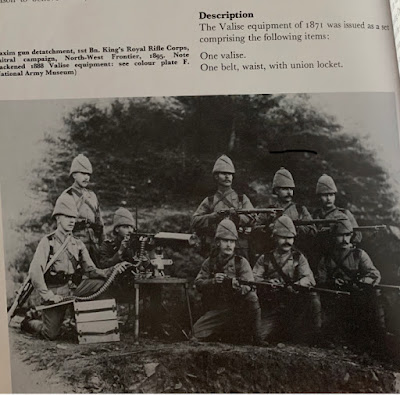 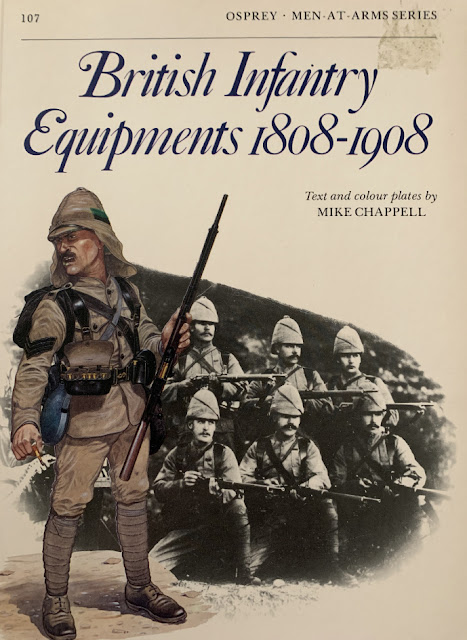 The following are WIP, work in progress pics trying to get these figs as close as possible to the references I'd found and was provided by other gamers, most notably friends Ethan "Mad Guru" Reiff and Nick "I can draw anything" Stern. 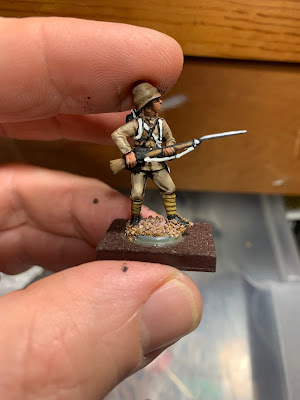 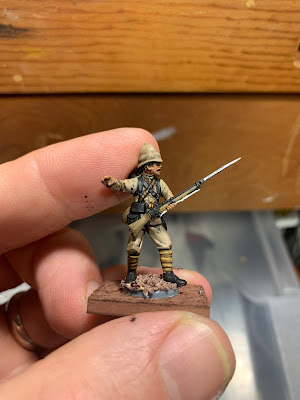 After the 1879 valise equipment and gear was all painted black 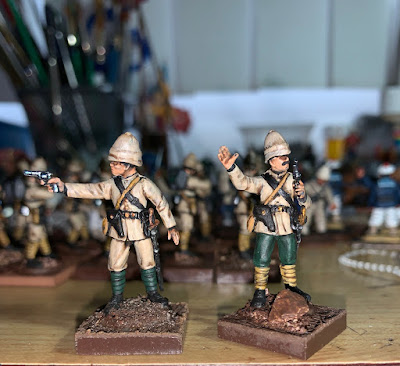 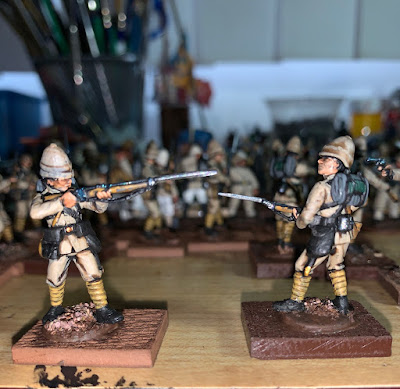 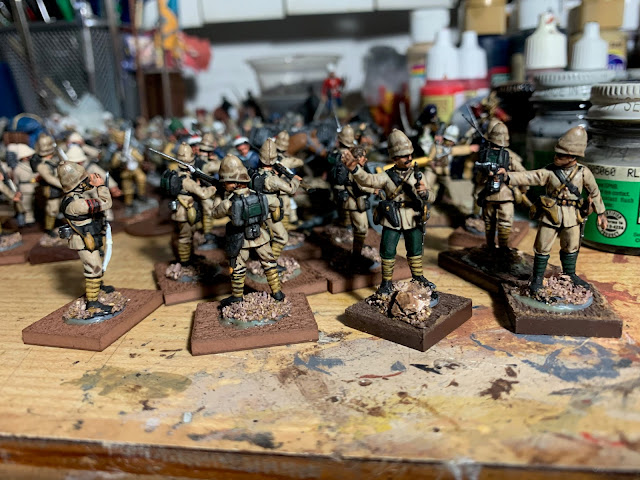